Tempting fate can be a risky business but it can also produce some surprising results. The surprising result is that the bees from last year seem to be responding well after the winter. With the good weather of recent days, the activity at the hive seems to be increasing and if the weather stays the same, then I am go to tempt fate and say that it looks like they are going to survive. 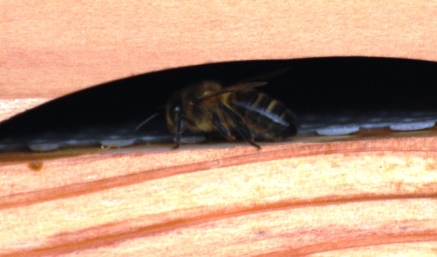 As I have previously stated the Bee Group has been preparing for the introduction of a second hive. The hive and equipment was purchased with the help of a grant from Fingal County Council and we had a number of assembly days to show beginners the different components that make up a bee hive and the equipment used during inspections of the hive. I want to thank all those who came along and I hope that you learned something.

We also have been busy clearing out the bee area. In the last few weeks we have been cutting down weeds, laying weed control fabric, and transporting wheelbarrow loads of wood chip. This is to make the area more accessible, easier to view the hives and remove the chances of humidity problems within the hive.

Did you know that on the allotment site, we not only have a growing year but now we also have a bee year. You may think that they would come at the same time, but like all things connected to nature, it has its own agenda and will always win in the end. The bee year usually starts in November where the growing year starts in March (depending on the weather). Since the beginning of the bee year; there have been a few moments were I thought that we had done something wrong. For instance, in early January we could not hear any buzzing from the bees, even after our attempts at knocking on the sides of the hive to get a response. Nothing! So it was with great relief that we saw dead bees at the entrance of the hive. Young bees are tasked with removing deceased members of the community and keeping the hive clean, and as this task is carried out then you know that there were bees inside. It is probably the only time that it is good to see anything dead. 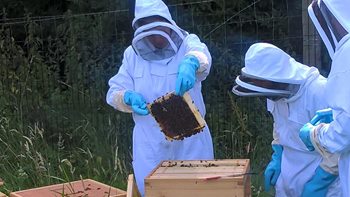 Checking on the bees over Winter

On the 28th March, we received our second colony which was kindly donated to us by Bill Ryan who is a member of the allotment association and a beekeeper. We can’t thank him enough for his kind gesture and for saving us €s for not having to purchase a colony of bees from a bee breeder. Having to second hive will hopefully increase the honey yields that we may be fortunate to have this year and also in case we lose the colony due to our own incompetence or for some other reason. 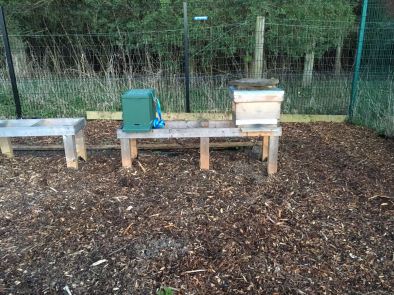 Bee nuc on site at end of March

P.S. Since I originally wrote the new bees have been transferred from the nuc to the full hive. An inspection of the original hive was also done and although not much seems to have changed ( as regards the size) of the colony, they seem to be in relatively good condition, considering they have cooped up for over 4 months.

We will report on this in future blogs.

This site uses Akismet to reduce spam. Learn how your comment data is processed.

The Committee are always happy to hear suggestions from plot holders. Please use the contact form to send us your thoughts!